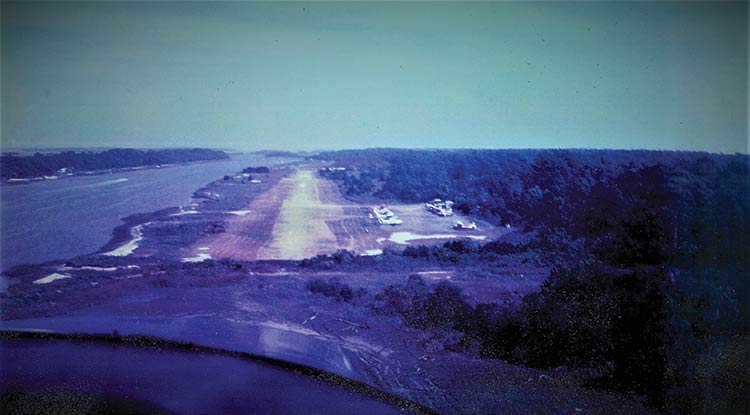 Once upon a time, before it had a bridge from the mainland, Isle of Palms had its own airport. You couldn’t fly directly to London or Los Angeles, but Atlanta and Altoona wouldn’t be out of the question.

Perhaps the most important person in the history of this airfield was Haywood “Woody” Faison, who fell in love with flying at the age of 5 in his native North Carolina.

Faison learned everything he could about those early flying machines – how to fly them, how to build them, how to repair them – by hanging out at airports, bumming rides and working as a volunteer mechanic.

When he retired, Faison headed to South Carolina, setting his sights on the Isle of Palms “Airport.” Constructed in 1951 by the South Carolina Aeronautics Commission, the field initially was a simple 1,800-foot-long by 135-foot runway along the Intracoastal Waterway. North of the intersection of Waterway Boulevard and 34th Avenue, it was paved with crushed oyster shells and had no permanent facilities.

By the time Faison arrived, the runway had been lengthened to 2,900 feet but remained little more than a long, flat field used by occasional recreational flyers headed for the IOP beach communities.

Faison convinced the South Carolina Aeronautics Commission to let him base his newly-formed Palmetto Air Service at the IOP airfield and, in turn, agreed to pay the Commission 2 cents on every gallon of gas he pumped. And pump he did, from an ancient above ground hand-operated pump located near the makeshift portable building he put up. He added tie-downs for a few planes and a homemade lighting system for night operations and took up residence on Forest Trail, an easy walk to the airstrip.

From that once run-down and untended landing strip known as Harold F. Willson Memorial Field, Woody Faison built a thriving airport community. The field served Cessnas, Piper Cubs and Beechcrafts and also the infrequent multi-engine plane. Once, a WW II vintage B-25 landed there on its way to become part of a permanent exhibit aboard the USS Yorktown at Patriots Point.

Charlie Way, chairman of the board of the Beach Company and son-in-law of J.C. Long, who, through his Palm Realty Company (precursor to the Beach Company) helped establish the airfield, recalled the popular “breakfast fly-ins” Faison organized at the thriving little strip.

Primarily, the airfield was a convenient way for aviators to reach Isle of Palms, at the time accessible from the mainland only by crossing the two-lane Ben Sawyer Bridge at Sullivan’s Island, then proceeding northeast across Breach Inlet. Edna Young, Faison’s flying protégé, recalled that residents of Goat Island would moor their boats at the airfield and walk across the runway to the stores and the beach. In time, the airfield was home to more than a dozen planes and handled hundreds of transient operations annually.

The busy little airport closed in 1984, and Palmetto Air Service moved to Charleston International Airport, then to the East Cooper Airport – now now Mount Pleasant Regional Airport. Edna Young, originally a “go-fer,” later was Faison’s business partner in Palmetto, which focused its operations on flight training. She took over the company when he died and retired from the business in 2016.

Today, the former Isle of Palms Airport is familiar to golfers as roughly the 10th, 11th and 12th holes of the Wild Dunes Harbor course.

While aviation on Isle of Palms has faded into the halls of memory, its significance as an early landmark in the island’s development lives on. And its history is inextricably linked to a lifelong aviator who just couldn’t see a good opportunity go to waste.

By now, you may recognize his name. Aviators flying out of Mount Pleasant Regional Airport are going wheels up from Faison Field.

Nostalgic Timeline of the Isle of Palms