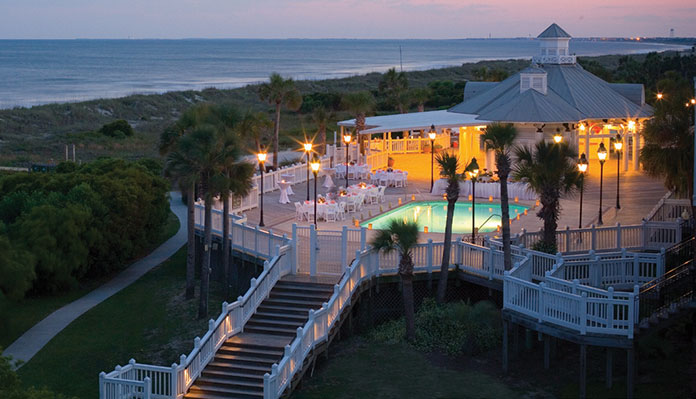 Many Charlestonians can recite the accolades heaped upon their hometown over the past decade, but they might have failed to notice that the area’s premier resort, Wild Dunes, is pretty popular as well. The readers of Condé Nast Traveler have ranked the Dunes as one of America’s “Top Southern Resorts” for four years running. Its twin golf courses are rated among the nation’s and world’s best, and Tennis Resorts Online has named Wild Dunes one of the top five tennis resorts in the world.

To the first-time traveler to Charleston, the world-class resort at Isle of Palms’ north end seems a fitting complement to the world-class city just south of Sullivan’s Island. But this was not always so. Until the mid-1970s, most people who spent the night north of IOP’s 41st Avenue slept in a trailer or tent at the old Sand Dollar Campground.

Blogger Kelly Exline, who stayed at the campground with her family as a child, remembers “a magical sand dollar beach … our version of Shangri-La.” 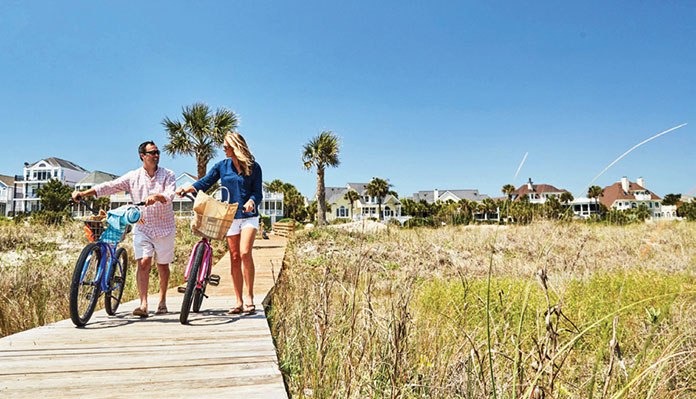 “A visit to a campground on the Isle of Palms,” wrote Post and Courier reporter Beth Brown in an April 16 feature on the growing camping craze, “reveals both young and old people, from many walks of life.” Brown proceeded to introduce the reader to a Danish couple with two children who planned to stay just one night, fell in love with the island’s natural beauty and ended up staying a week. Another family, from Pittsburgh, discovered the island on their way back up from Key West. Mrs. Wilbur Stough, from York, Pennsylvania, couldn’t get over the friendliness of her fellow campers – or the black fox squirrels, for whom she made extra pancakes. The Stanhopes of Wisconsin were on their way back home after watching the Masters in Augusta. A married pair of graduate students at the University of Delaware, the Hazels, were camping with their dog, Perry, and two sons, Jeffrey and Jimmy.

“We think it’s just fabulous down here,” Mrs. Hazel told Brown. “If this property were at home, it would be full of homes. The land there is in such demand.”

The north end of Isle of Palms wasn’t in demand in 1970, but all that would change in the decade ahead. Within 10 years, the campground would be built over with condominiums, and the north side of the island would be locked behind manned security gates.

In June 1972, Henry Finch purchased the north end of Isle of Palms from J.C. Long’s Beach Company for just under $1 million. That December, the Sea Pines Company of Hilton Head, fronted by Charles E. Fraser, took a $4-million option on the land. Fraser professed that before any development took place, he would first offer the property to city, state and federal agencies with the idea of turning it into a public park. However, if the public agencies didn’t make an acceptable offer, the Sea Pines Company would develop a “resort community to be known as the Charleston Beach and Racquet Club.”

State Rep. Arnold S. Goodstein proposed that the state buy and preserve the north end of Isle of Palms, along with Dewees and Capers Islands, but neither the county, state nor feds came up with an offer. Even so, development on IOP did not begin immediately. Many Charleston County residents were concerned about the land’s new owners. Though Fraser was a respected and connected South Carolina native, his company, Sea Pines, had just signed a 20-year contract with the Kuwaiti Investment Company to manage the development of pristine Kiawah Island. The nation was in the midst of a recession, in part because of OPEC’s 1973-1974 oil embargo, which had driven gas prices through the ceiling. The idea of Kuwaiti sheiks buying a South Carolina sea island was unsettling to more than a few residents of the Palmetto State. At a meeting in November 1974, Fraser felt compelled to promise that absolutely no Kuwaiti money would be used to develop IOP. He also assured the audience at a public hearing that, unlike the resort-styled Kiawah and Hilton Head Island, Isle of Palms Beach and Racquet Club would be developed as “homes for year-round residents, including active retirees.” While the company planned to build a motel behind its gates, Fraser assured the public that he didn’t envision “gearing the development for tourists.”

By early 1975, the Sea Pines Company planned to build two hotels for tourists, with up to 350 rooms. The company was also lobbying to have State Route 703 widened on Sullivan’s Island and Isle of Palms. The Sullivan’s Island Township Committee quickly put a halt to that idea, but plans for the resort, now the Isle of Palms Beach and Racquet Club, went on.

In April 1975, an act of the South Carolina Legislature conveyed the northernmost 1.8 miles of Palm Boulevard – State Route 703 – to the town of Isle of Palms so it could allow developers to move it further inland, away from the beach. Fraser wanted to build more oceanfront properties, but the state legislation made it clear that Isle of Palms leaders were expected to “encourage” the resort to continue to provide public access to the island’s northern beaches.

This showdown would have to wait; Sea Pines had bigger problems. At its peak, the company had 11 resorts from Virginia to Puerto Rico, but, when the Federal Reserve Board cranked up interest rates from 6 percent to 12 percent in an attempt to stall inflation, housing starts plummeted, and the Sea Pines Company began selling its properties.

Then, in April 1976, the Kuwaiti Investment Company abruptly severed Sea Pines’ lucrative, long-term contract to manage the development of Kiawah and sued Fraser’s firm for $1.6 million for allegedly defaulting on its obligations. Fraser and Sea Pines President James Light protested their innocence but announced that they would take this opportunity to develop their Isle of Palms property. Unfortunately, by this point, the tailspin was too steep: That November, the Sea Pines Company sold its ownership in the Isle of Palms Beach and Racquet Club back to Henry Finch and his partners, Wilbur Smith and Associates.

In December, the Isle of Palms Town Council made a major concession to the developers. The Finch/Smith plan to fence off its end of the island couldn’t happen unless old Highway 703 was closed off at the resort’s entrance. In exchange for closing the road and rezoning to allow for lower-density housing, the town received a 10.5-acre parcel of land on 41st Street and another one-acre parcel inside the resort.

On Jan. 3, 1977, the front page of The Post and Courier trumpeted: “Initial Construction Has Begun on Isle of Palms Development.” The article’s subhead noted ominously: “The Closed Road: A Topic of Controversy.” Isle of Palms Mayor J. Blair White acknowledged that the gate built to keep his citizens out of the construction area had made some people angry. “I don’t know what we’ll do yet,” White admitted, when confronted with the idea that permanent gates would replace the temporary ones, “but I would like to see some sort of access to the beach.”

Town Ways and Means Committee Chairman Henry Shaffer had less patience with those who stood in the way of the club’s progress. In The Post and Courier, he opined, “We [the rest of the Isle of Palms] already have about a half-mile of pure beach with free parking. I think what people get upset about is not having their own ‘private’ beach available to them.”

And so the general public’s access to the island’s northernmost beaches vanished.

A SUBURB BY THE SEA

On July 4, 1977, the Isle of Palms Beach and Racquet Club opened with two tennis courts and a dozen homes under construction. Finch explained that the plan was to build the club slowly. He assured readers of The Post and Courier, “It will be more for permanent residents, not planned as a resort.”

Finch also assured Charlestonians that the planned 350-room inn, marina and shopping centers would be accessible to the public – although a new, permanent gate would be built to restrict traffic in the development’s residential areas and to keep non-members out of the tennis and golf clubs.

In a June 1976 interview, Finch stated that while he would not promise to build a golf course, a famed course designer had been looking over the location. “George Fazio tells us that with the terrain we have,” Finch told a Post and Courier reporter, “the course could be the best on the East Coast.”

Ads during the summer of 1977 announced the newly opened tennis courts and advertised the first beach cottages, selling for $57,000 each. Would-be buyers were promised, “all the advantages of city life, without any of the disadvantages.”

In 1980, George Fazio’s nephew, Tom, designed his first golf course, the Wild Dunes Links Course. Almost immediately, the nation’s major golf magazines heralded it as one of the top 30 courses in the world. A year later, the Wild Dunes Ocean Course brought so much fame to Finch’s property that he renamed the club the Wild Dunes Beach and Racquet Club.

In early March 1984, longtime Wild Dunes home developer David H. Lucas, attorney James Boyd and other businessmen purchased the resort from the Finch family for nearly $28 million in partnership interests and close to another $15 million in stock. That September, new Wild Dunes Associates Chief Executive Officer and President Noel D. Thorn explained the company’s plans for the remainder of the resort’s development, which Lucas estimated as only 45 percent complete: “We’ll maintain exclusivity,” the 37-year-old Thorn announced, “but that’s the nature of our company. At the same time, we want to do things to make us good citizens of the Isle of Palms.”

Under Thorn’s leadership, Wild Dunes enjoyed record sales while also contributing to the Isle of Palms community. In 1988, for instance, when IOP Mayor Carmen Bunch needed to replace the city’s rescue boat, Thorn agreed to purchase a boat and lease it to the city for a dollar a year.

Eventually, the harbor’s amenities would include the Tradewinds Restaurant – today’s Morgan Creek Grill.

By 1990, Wild Dunes Associates was largely finished with Wild Dunes, having turned its attention to the new Dunes West development in Mount Pleasant. Los Angeles-based Lowe Enterprises took over management – and, eventually, ownership – of Wild Dunes through its subsidiary, Destination Hotels and Resorts. A few years later, they purchased the Links Golf Course for $8.2 million. In 1999, the city of Isle of Palms bought the Wild Dunes Yacht Harbor from the Finch family and changed the name of the much-improved facility back to the Isle of Palms Marina

Clearly, the Wild Dunes Resort of today is a far cry from the community of “permanent residents” that Henry Finch described to his neighbors. Instead, it’s estimated that fewer than 25 percent of the resort’s units are primary residences for year-round owners. Roughly 30 percent of its houses and condos are part-time vacation homes, and around 45 percent are rental units.

It’s a steamy Friday night, and I’m working checkout at the Isle of Palms Harris Teeter. A family of Wild Dunes guests, New Yorkers I remember from earlier in the week, unload a final night’s worth of groceries and beer onto the conveyor belt.

“What did you think of Charleston?” I ask. “Did you do the horse-drawn carriage?”

Dad pulls out his wallet: “Where is Charleston, anyway? Is it close?”

I provide a quick lay of the land, but they figure they’ll save the history stuff for next time.

“But that Wild Dunes – that’s a great place,” says Dad. “Not like this,” he gestures to the crowded store. “It’s peaceful. Like your own private beach.”

The Creation of Wild Dunes

Try A Round at Wild Dunes: Fall is for Golfers