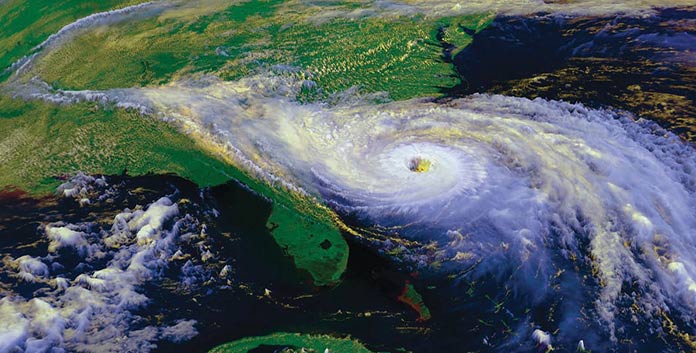 Directly after Hurricane Hugo in 1989, Publisher Bill Macchio revealed his limited-edition magazine titled “Hurricane Hugo: Storm of the Century” to residents of Mount Pleasant and the surrounding islands. This harrowing account by Jim Cox originally appeared in its pages. We hope you will enjoy the look back, and be sure to stay safe for this storm season.

It was 8 a.m. on Sept. 25, four days after Hurricane Hugo. Following an all-night drive from Atlanta, my son’s evacuation home, I boarded the harbor tour boat at Patriots Point for a return to the devastated Isle of Palms. In a pouring rain that added to the gloom, we were a ragtag crowd. Having gotten around the curfews, dodged fallen trees and avoided dangling electric lines, I tried to bring my weary brain back into balance.

“We are not at war,” I told myself. “We are only displaced persons on a mission of renewal and rejuvenation.”

This was the first boat to the island, and the first time anyone had been able to get back since the storm drove us away. To add another war-like dimension to the incredible scene, we, in effect, had to give our name, rank and serial number before boarding the boat. You had to have the proper ID to prove your right to take the “Isle of Palms Clipper.”

“Where are you taking us, captain?” Another disheartening response. The only place the boat could berth was at the Wild Dunes Marina, a few miles from the other end of the island where most of us wanted to go.

The rain blew across the deck. The man sitting next to me was an airline pilot who had just come to Mount Pleasant from New York. He wore only shorts and a sport shirt, was protected only by an umbrella and was shivering.

“Didn’t have time to find clothes,” he said. “I’ve rented out my house on the island for the winter, and I need to find out if the people can move in.” (It turned out he didn’t have a house remaining to rent.)

And then a voice of hope was heard:
“… the light house is still standing.”
“… Stella Maris Church looks OK.”
“… some places don’t look too bad.”
My thoughts were strange. Why did this Biblical phrase flash through my mind: “Many are called, but few are chosen?”

We were on the river nearly an hour and had just passed Goat Island. It looked as though a water-going street sweeper had passed by, throwing docks and chairs, boats and chimneys, toilet bowls and bookcases upon the shore. For a mile, the land was littered with household furnishings and debris, while in the background an occasional desolate and gutted dwelling raised its broken body.

The scene and the circumstances became even weirder. The ill-clothed and bleary-eyed group stood and stared at a crazy bridge, askew at a 35-degree angle, useful only for a wild, high-jumping water skier.

“How could wind blow down the Ben Sawyer Bridge like that?” someone asked.

No answer, except one woman who spoke in a trembling voice, “It’s awesome.”

An angry voice: “You can thank Sullivan’s Island for that. That lousy bridge should have been replaced years ago!”

As if foretelling the future, the man with the red beard and cowboy hat said, “The Corps of Engineers ought to be able to raise it and put it back on track.”

Up the Intracoastal Waterway, passing Sullivan’s Island, the awful fury of Hugo became more and more visible. Roofs missing, houses sliced in two, one standing on its side. Where docks stood, I saw but a few sticks poking out of the water.

“My God,” the lady in the blue jumpsuit screamed. “That’s where my friend lived!” Her voice died to a whisper. “No more. It’s broken to pieces.”

We passed a graveyard of boats, maybe a hundred tossed like matchsticks onto the land across from the marina. We hugged our rain gear and lifted bags as we moved toward the gangplank. The captain’s voice came over the loudspeaker.

“This boat will leave at 12 o’clock sharp. You don’t want to be left behind. There’s no food on the island and no place to stay overnight.”

A deckhand told one elderly lady that she couldn’t get off the boat because it was too dangerous for her. An Isle of Palms City Council member reinforced the warning.

“Be prepared for the worst,” she said. “There are snakes, streets washed out, holes filled with water maybe 10 feet deep. Gas is leaking on the island. There’s raw sewage and dead animals. Don’t touch your mouth!”

The dreary group, soaked now, stumbled across the dock. Somebody said there may be no transportation. How could I walk from one end of the island to the other in an hour-and-a-half? Under these conditions? I admit, I was ready to give up: “You’ve won, Hugo!” But JoAnn, my daughter-in-law, bolstered my sunken spirits.

“We’ve come too far to give up now. Let’s walk out to Palm Boulevard. Maybe we’ll find a ride.”

And we did – a pickup truck pulling a flat-bed trailer. The “last-mile gang” splashed through the muddy water and piled onto the truck. The lifesaving driver avoided washed out streets by steering into yards and around scattered house furnishings. Sometimes the trailer caught obstructions, and, amid shouts of “hold up,” we piled off and freed the trailer hitch. One man tried to relieve the tension by shouting to the driver, “Look out for the house in the middle of the street.” It had been carried 30 feet from its foundation onto Palm Boulevard.

An interminable time elapsed, amid “ohs” and “ahs” and “Look at that house. It’s a mess!” We came to my house on 4th Avenue. I saw it across heaps of marsh grass, around jagged lumber and over a vagrant lawn mower.

We hurried in to check out the appearance of normalcy. Boots flopping, raincoat dripping, vision dulled, our questions were answered. The house had fallen off its foundation, six feet down and six feet over plants and bushes. Trees were uprooted. The neighbor’s tall pine had crashed down on the fence. No more grape arbor. We entered the house over the broken deck and through the sliding glass door that had slipped off its track. The fallen chimney was only a minor obstruction. Inside, a giant named Hugo had vented his wrath, tumbling furniture into muddy heaps of junk. A 4-foot wave of water had drowned the lovebirds in their cage, corroded tools and electrical appliances, destroyed cloth and clothing. Utter chaos! I was silent – feeling shock, numbness and disbelief. I was beyond fear or worry. I waited for the firing squad to send the final bullet into my brain.

We picked up a few things and put them down again, and stuffed a memento into a plastic bag.

“There’s the old family Seth Thomas mantel clock. Let’s take that. We may be able to clean up the photo album. Let’s go. There’s nothing more we can do now.”

Back on Palm Boulevard, people were struggling along the street, carrying bags of salvage and hoping to get a ride back to the boat. One man came out of the ruins carrying a cat in his arms.

“She was still in the house. All I could save. Glad my wife didn’t come. She’s pregnant, and I couldn’t stand a miscarriage right now.”

We got back to the marina by noon. The boat didn’t leave as scheduled, and we waited in line for an hour, directly opposite a drain pipe that splashed rain water over us, adding insult to injury.

Then we felt like celebrities. There were TV reporters asking, “What’s it like at your house? What did you find? How do you feel?”

The voyage back to Patriots Point was uneventful, even a relief. One man said, “Now I know what ‘Come hell or high water’ means.” The same ragtag gang rode easier now. We had seen the worst and survived.

“Where there’s life, there’s hope,” the woman in the blue jumpsuit said.

One guy said he would go back and start all over again. Me? I’d cry tomorrow.

Night of Wind and Water

Nostalgic Timeline of the Isle of Palms